Proudly Australian owned and with over 9,000 completed projects under our belt and counting! 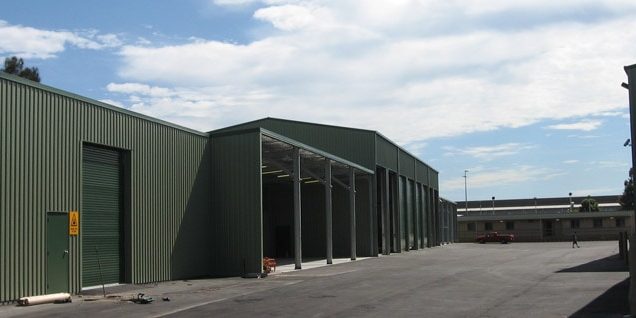 My name’s Ray and I run a medium-sized importing business on the north side of Brisbane. About 6 months ago, I had a major problem with constructing a customised warehouse – a problem that could have been a disaster for my business.

Things were looking rosy. I’d just made a deal to import white goods from Korea but I knew my current storage facilities weren’t going to be big enough for the increase in volume.

After doing a bit of research, I found a shed building company that seemed alright. They had a state-of-the-art showroom, web site, quotation presentation material and they were all over the media, so they looked trustworthy enough.

When I decided to go ahead with this mob, I called them up and talked to some bloke on the phone. He ummed and ahhed a bit when discussing the deal – I asked for some custom features – but he said that would be no problem.

When he hesitated, that should’ve been a warning sign – but as I already had a good impression of the joint, I just went ahead.

I made a point of asking what the lead time was for construction of the shed and he said 4 weeks. So, I went ahead and booked my fit-out guys and also started negotiations for my first shipment from Korea.

After 3 weeks went by, I got a late afternoon phone call. When the guy first started talking, I knew by the tone of his voice the situation wasn’t good. He told me that he was calling from the shed company and that there was a problem with the lead time.

Apparently, the guy I talked to on the phone to make the order for the warehouse didn’t take into account the fact that I wanted various custom modifications. He’d quoted me the lead time for their standard warehouse build.

Well, I just about went through the roof. In very short order, I made the guy aware that I WAS NOT IMPRESSED one iota. He then proceeded to say I would need to wait an extra – WAIT FOR IT – 3 months!!!

People often talk about having to put out spot fires when running a business, and you concentrate on the biggest one at any given moment. Suddenly, I had a raging bushfire to contend with!

The fit-out guys had already been booked – and I had negotiated an arrival time for the whitegoods based on the lead time I was given. Now it looked like I might have to try renege on the deal.

To try to end this nightmare as quickly and painlessly as possible, I called in all my senior staff. I told them the gist of what had happened – and asked them to look around and then make a suggestion about who we could trust not to stuff us around.

3 out of the 4 recommended ASI Build.

When I had a chat to the principal Steve, I could immediately see that he knew what he was talking about. His 40 years of experience meant that there was no chance I’d be led down the garden path again.

After telling him the whole story, he told me I could rest assured that he would take care of my customised building personally – and that if I had any questions or concerns, I could contact him directly.

I smiled when I asked him what his lead time was. He smiled as well, saying that it was 4 weeks – and yes, he was factoring in the time to include the add-ons I needed.

No more having to go through a less-experienced staff. No more changes in lead time. No more worries…

I was regularly updated on how things were proceeding. The shed was up 5 days inside the deadline – and I couldn’t be happier with it. The custom modifications I asked for were all included and fitted in seamlessly.

The process for the build went smoothly from start to finish (as did the importing deal for the Korean whitegoods, by the way).

If ASI Build hadn’t come through for me, the ramifications would have been horrendous – simply put, ASI Build’s customised warehouse saved my business.

Why choose an ASI Build shed? ASI Build will build you the best solution for your project. Our distribution network, with over 24 manufacturing centres, is Australia-wide. Contact us today on 1300 760 007 or at https://www.asibuild.com.au/contact-us/

ASI Build – Custom Steel Buildings Constructed Ahead Of Time And Under Budget
July 2, 2019

Why ASI Build Was The Right Custom Steel Building Choice For Our Undercover Indoor Arena
June 13, 2019